One of my favorite movies is Napoleon Dynamite. It’s an ecclectic story with a cult following about high school kids at their most awkward stages. In one of my favorite scenes, Napoleon’s grandmother is heading off to visit friends, and Napoleon asks, “What is there to eat?” His grandmother replies, “Napoleon, just make yourself a dang quesa-dilla!” Seems pretty easy to make yourself a dang quesadilla with ingredients you might have in your garden or fridge. My Garden Vegetable Quesadilla will hit the spot, and is quick to prepare. 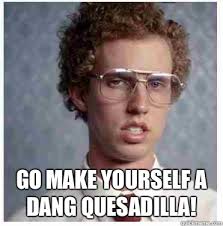 The usual quesadillas in my world have chicken or refried beans as filling. This quesadilla uses vegetables that are fresh from the garden. Zucchini, yellow squash, red bell peppers, tomatoes, mushrooms, garlic, shallots, potatoes, and spinach are great ingredients for the filling.

Just chop and saute the veggies in some olive oil in a non-stick skillet.

Sandwich the vegetable mixture between two flour tortillas. And of course, I always add some gooey shredded Monterey Jack cheese to hold together all the veggies.

Heat the quesadilla on a griddle or in a large skillet until slightly browned on each side, the filling is hot, and the cheese has melted. Remove from the pan, place on a cutting board, and cut into triangles. Serve with sour cream, salsa, and guacamole for dipping.

From the kitchen of A Food Lover’s Delight….

1. Over medium low heat in a non-stick skillet, saute the shallot and bell pepper in the olive oil. Add the garlic and zucchini. Add the mushroom caps and cook just until the mushrooms are soft. Add the spinach and stir around until the spinach wilts. Remove from the heat.
2. Sprinkle the Monterey Jack cheese evenly on one tortilla.
3. Spoon the sauteed vegetables over the shredded cheese on the tortilla.
4. Cover with the second tortilla.
5. Warm a large round skillet or griddle over low heat.
6. Carefully move the quesadilla to the skillet or griddle and cook until the cheese melts inside the quesadilla. Flip over at least once to ensure even cooking. Let the quesadilla brown slightly on each side for a crispier texture.
7. Remove quesadilla to a cutting board and slice into six pieces like a pie. Serve three pieces per person.

Variations: Add some cooked chorizo or some shredded chicken or pork to this quesadilla for a meatier version. Omit the cheese if you are seeking a lower fat version. Also, use low or nonfat tortillas.

NOTICE OF FULL DISCLOSURE: Some links on this website contain affiliate links through Amazon.com, Pepperjam Marketing, Rakuten LinkShare, and other associated affiliate sites. I MAY receive a small commission but only if you make a qualifying purchase after clicking on my link. These small commissions help pay for hosting and upkeep on A Food Lover's Delight and its sister website(s).

My Tweets
DISCLOSURE: Clicking on any ad which results in a sale may provide a small commission for hosting and upkeep of this site. Thank you.